An entertaining Paul Bulcke at DMEXCO 2016

Overview of the session: Can a 150-Year Old Company Lead in Digital?

To set the scene, M. Bulcke shared a few key figures concerning the company he is leading, Nestlé:

A company of this size and with such a history does attract its own gravity. The problem today is that the future is unpredictable. Society is on an inflection point, and not just because of the political turmoil, and immigration etc. It is also due to the rapidly changing technologies that affect society as a whole.

People and consumers are quick to detect a wrong message. As M. Bulcke puts it precisely: “With the technology today, everybody has a voice now, and is heard. Digital challenges the society but is also a huge opportunity.”

So what’s going on at Nestlé when it comes to digital?

Gravity built through history has to be overcome. Nestlé has set itself the following target: the company wants “to be an industry leader in leveraging digital technology and ecommerce to delight consumers, enhance lives and build brands”.

And it is a true journey with obstacles, and successes. Nestlé discovered among other things that they couldn’t talk as a company on social media and try to convince consumers. “We learned to be humble, to participate, to treat every opinion with respect (as critical as it can be). This key learning catalyzed the change in our organization.”

For example, compared to a few years ago, the corporate website has tremendously changed to be adapted to today’s needs. Also Nestlé conducted a few pioneering experiments, e.g.: the first brand to run a sponsored periscope stream, one of the first with a 360-degree video ad on Facebook…

But digital goes beyond the contact with consumers. The entire chain is affected as it has an impact on business, factories, and the relationships with stakeholders, etc., even on how Nestlé ‘s members interact with each other internally.

An example on how innovation is also affected.

Milo a well established brand of Nestlé knew incredible results with the launch of an entire health concept powered by digital. The Health Packs were composed of the product and a fitness activity tracker. An entire health program allowing parents to go online, check their kid’s activity and receive tips on health and nutrition accompanied them. So this was a true innovative concept for the company, which wouldn’t have been possible without the arrival of digital.

The digital acceleration team or DAT

With the arrival of digital, the organization as a whole needed to go through a cultural change. With that in mind, the DAT program was started. The Digital Acceleration Team is a group of people from all over the world who, during an intense eight months period come to the headquarters, share their ideas, learn from each other, and become part of a network. It’s an intense experience after which the participants go back to their respective country teams. But then it disseminates the ideas and interactions they had into the organization. For Paul Bulcke: “The program started five years ago and helped to create a huge informal power. And sometimes informal overpowers formal”.

To testify about the experience, the keynote speaker called someone who had participated to the program and graduated from the DAT. According to his witness, the DAT experience is marked with the cultural diversity. She described it as kind of a digital united nations. She also emphasized the importance of the exchanges with local DAT teams; exchanges about ecommerce, programmatic etc. And finally to help disseminate the ideas, she explained that once back in their respective countries, the DAT graduates do reverse mentoring, so mentoring with their seniors. For those who know, it is similar to the Aiesec program (“One by one we exchange people and create change agents”) but with here the digital aspect within Nestlé as the focus.

Hearing the comments and reactions left and right, one couldn’t deny that Paul Bulcke captivated and charmed the audience with his witty and loose style. Behind me, I even heard the comment: ”Diesen CEO ist Cool”. I did recognize the not well known but how powerful Belgian style and humor (all the good Belgians have it).

But more than the efforts and accomplishments to bring a 150-year-old company into the digital era, I must point out that the key learning was humbleness. Change was a necessity. In the digital conversation with consumers, arrogance doesn’t work. One must stay humble and respect the concept of a conversation. This is how you can define future success in that area. 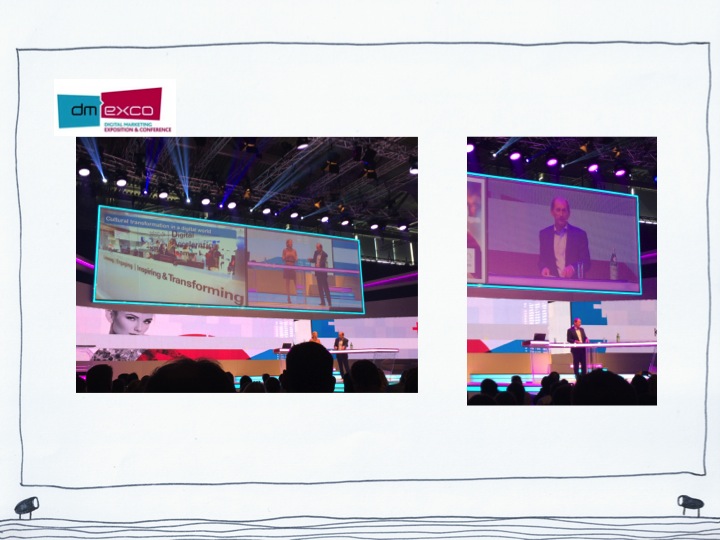